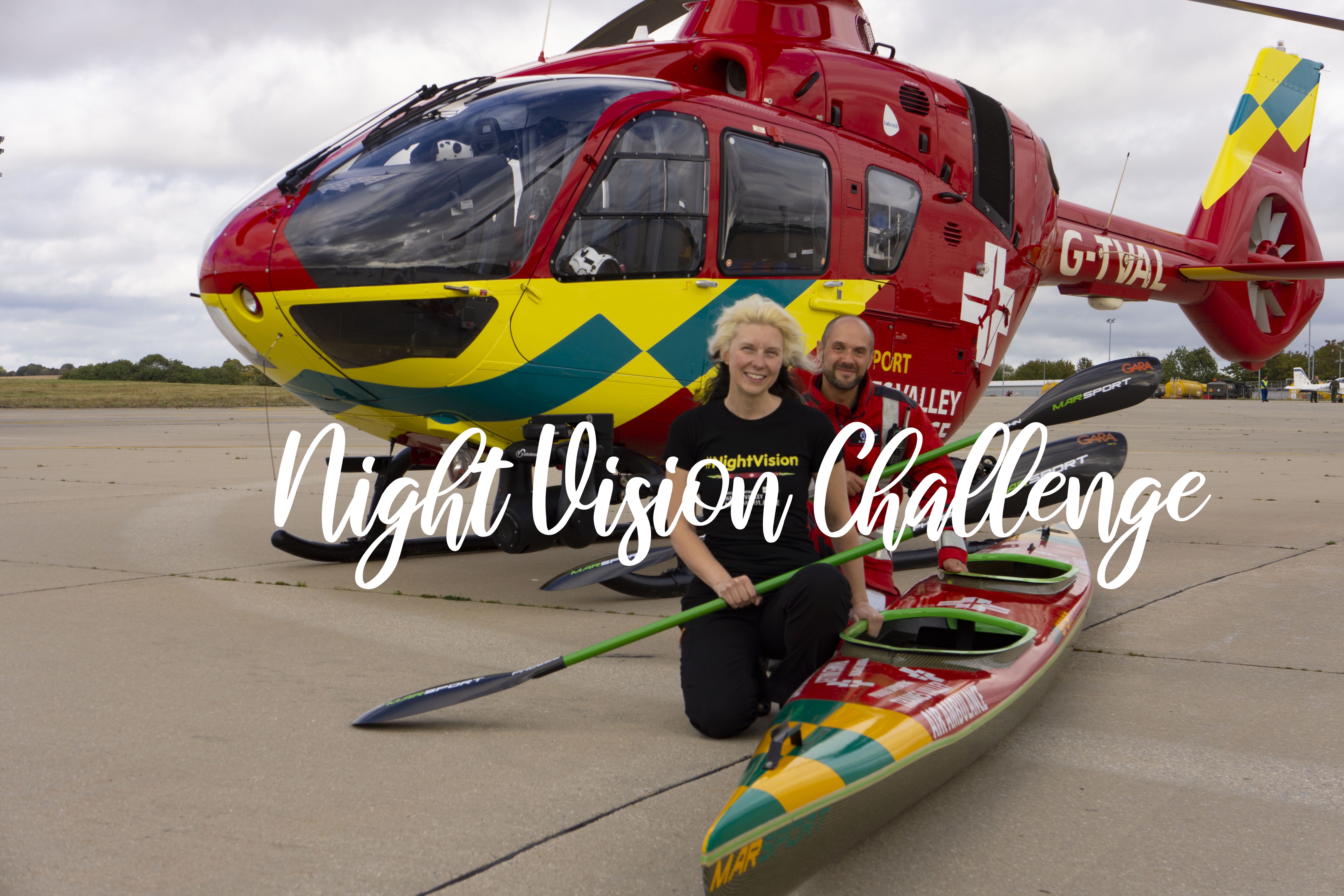 Circumnavigating the entire Thames Valley Region in a kayak is tough – but imagine doing it in the dark. That’s exactly what Phoebe and her friend, Thames Valley Air Ambulance’s (TVAA) doctor, John Pike will be attempting starting on September 29, 2019 in their ‘Night Vision Challenge’.

To raise awareness about the life-saving night operations that the critical care team regularly provide, the pair will be kayaking 300-miles (the total circumference of the distance the TVAA covers) in a specially made Air Ambulance kayak. Taking in some of Britain’s most iconic waterways – including the River Thames, Grand Union Canal, Oxford Canal and Kennet and Avon Canal – and a night hike over the Uffington White Horse (see map below), John and Phoebe will be paddling throughout the night starting on Sunday, 29 Sept – until Thursday, 10 Oct, sleeping wild by day, and using only what they can fit into their kayak.

“Navigational challenges, lack of daylight, tough weather conditions and extreme physical and mental fatigue are just some of the difficulties faced by Air Ambulance teams every single shift,” says John. “The Night Vision Challenge we are undertaking has been designed to mimic these conditions for myself and Phoebe to highlight the vital work that TVAA do over such a vast patch of the country with no Government funding, relying solely on donations from the public.”

During the day John and Phoebe will be doing pop-up talks around the region sharing tales of their adventures and giving insight into a day in the life of the Air Ambulance. They will be revealing their locations daily (and nightly) on social media using the free location app, what3words(who partnered with TVAA in August) to encourage the public in the three counties to download it, as it can be vital for the teams to quickly locate casualties in a precise 3x3metre square, anywhere in the country. As a writer, Phoebe will be using the words generated by what3words each day to create a special Night Vision Challenge poem to share on social media.

“There’s a really serious message behind our Challenge, but I love the idea that this life-saving app can also be used to help people meet up – for talks and to come and spot us night-kayaking on the beautiful British waterways, for example, – and as a resource to have a truly epic adventure right here in the UK,” explains Phoebe. “It’s going to be a tough undertaking, but telling the Air Ambulance story through a journey that will take us 10 nights, but which the helicopter could cover in just 45minutes, helps people understand the vitally important role it plays in our community.”

Both John and Phoebe will be donating their time to undertake the world-first challenge. To donate funds to the Night Vision Challenge (all proceeds go to Thames Valley Air Ambulance) visit: