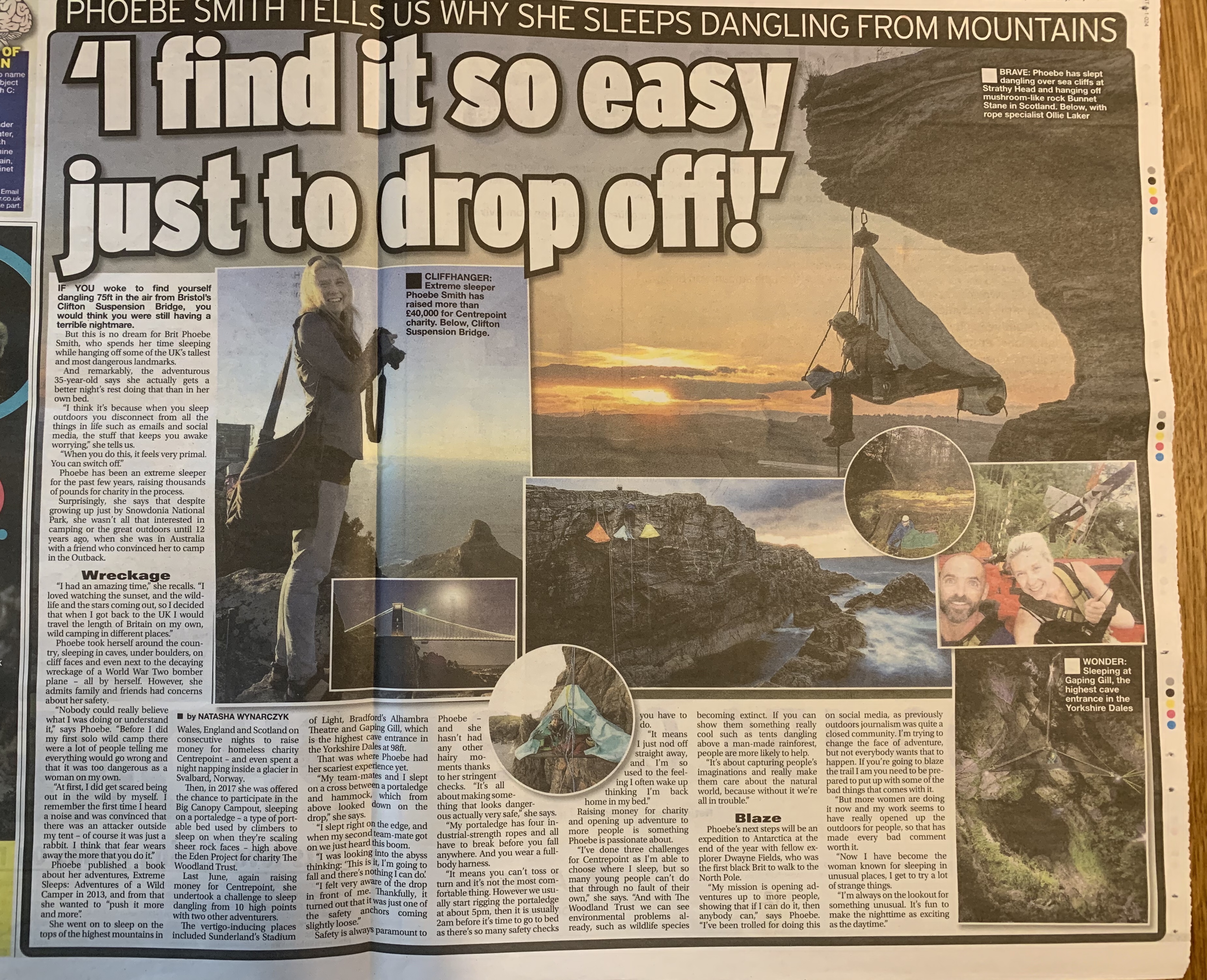 “Well, I never thought a daughter of mine would be centre spread in the Daily Star…” so wrote Phoebe’s dad when he sent her this article he saw in the British tabloids.

A few corrections need to be made: Phoebe didn’t sleep dangling from Clifton Suspension Bridge (she asked but they said no – ‘they’d be too many copycats’ apparently!) she slept dangling from Avon Gorge next to the bridge in Bristol – clearly seen in the below image.

Also – it says ‘NC’ aka ‘No Credit’ for the pictures – the wonderful photos from the Extreme Sleep Out were taken by the incredible Zak Bentley – and the credit was provided but the Daily Star opted not to use it. The shot of Phoebe on Table Mountain holding her camera was taken by Claire Roadley and the others are Phoebe’s.

Finally the Big Canopy Campout – brainchild of Phoebe’s wonderful friend and co-adventurer John Pike – that she is ambassador for, is to raise funds for the World Land Trust (not the Woodland Trust – as great as they also are!) – we think her northern accent confused the reporter!

At least it gives a huge shout out to Centrepoint who Phoebe is a proud supporter, fundraiser and Sleep Out Ambassador for and of course her upcoming #WeTwo Expedition with her polar teammate Dwayne Fields.

This of course comes following the interview with Phoebe in both The Telegraph and The Guardian, which accompanied her being nominated for Pioneer of the Year in the Women in Travel Awards.

Phoebe was also featured in the Telegraph as a gear expert for finding sleeping bags for summer use, which you can read about here.

For this the reporter relied heavily on Phoebe’s expert advice – she has been reviewing gear for more than 10 years and writes the Gear Guru pages for Wanderlust magazine every month. Need a sleeping mat to go with your bag? Her latest review is here.

Phoebe appeared on In the Moment magazine’s Podcast. On it she discussed her Extreme Sleeping, her role as Sleep Storyteller-in-Residence at Calm, and tips for getting a good night’s sleep.

You can listen to it and read the transcript of the interview here.

Or read this article about Phoebe’s storytelling which has just been published in New York.